skip to main | skip to sidebar

Raked Over Available as an eBook 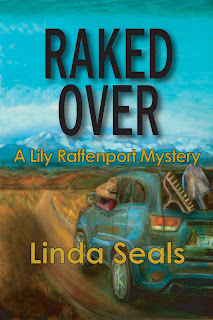 My first book, a mystery novel entitled Raked Over, is now available as an eBook. It takes place in northern Colorado and New Mexico, and is the first in a series of Lily Raffenport mysteries. Cover art is by local artist Barb Schmidt. Here's a descriptive teaser:


Discount a 50-something woman as just a “pathetic old hag,” and see where that gets you. The arrogant young boyfriend of a former employee of Lily Raffenport, a mellow but irreverent garden designer, finds out when he dismisses everything about Lily as he trowels on the story of his girlfriend’s drunken suicide. That write-off spurs the reluctant sleuth Lily into action because she isn’t buying his self-important tale, and her curiosity for the truth takes her to New Mexico and back, before she herself becomes the main mark in a drug ring’s cover up of torture and murder. Is exposing the killer to find the truth worth the risk of revealing herself to the cartel’s mastermind?

Here's the link for a limited time FREE download at Smashwords.com that supports multiple formats. If you have time to read it, I'd love to hear from you!

For Kindle lovers, it is also available at Amazon.com.

Linda Seals
Linda Seals is a writer and garden designer living in northern Colorado. She has also worked in the publishing and newspaper industries as an art director; owned a graphic design firm; and been a warehouse worker packaging seeds until she found her calling in the plants and dirt of gardening that led to the words and world of writing.

Song In My Head